”Better light a candle than curse the darkness,” Confucius 500 bc.

WE HAVE A DREAM 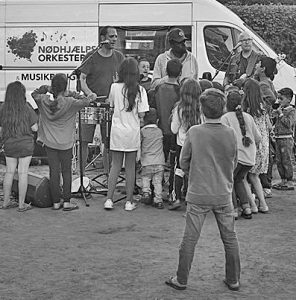 War, violence, and persecution have displaced more than 68,5 million people. Natural catastrophes and other disasters are continually causing terror, pain, and despair.

The Emergency Aid Orchestra is still but a drop in the ocean, but we believe in the power of reaching out and providing a breath of oxygen and a glimmer of hope.

Our vision is to spread the idea across the globe and inspire the formation of Emergency Aid Orchestras and Bands with local musicians on every continent and land wherever the need is.

We want to form an international network of artists who will come to each other’s assistance on short notice as emergency agents of light and hope.

The Emergency Aid Orchestra was launched in May 2015 at an event to raise money for the Nepalese earthquake victims with a wide array of volunteering musicians and performers.

The participants decided to form a permanent ”emergency band” that would be in constant “preparedness” to arrange and perform support concerts for victims of natural catastrophes, war or other humanitarian emergencies.

When fate has torn you away from your daily life, your home, your village your country, it is hard to maintain hope, dreams, and faith in humanity.

The Emergency Aid Band wants to bring light and oxygen, if only for a few moments, with music and dance.

Lately, we have been playing for children and youngsters stoved away in secluded Danish refugee camps.

Our experience shows it is possible to strengthen empathy, respect and mutual compassion with the universal language of music.

We believe that even a brief moment of joy, play and togetherness has a long-term impact on people in misfortune and adversity.

The orchestra also plays concerts with the purpose of raising funds for charity, when urgencies demand it.

The recipients will typically be the established emergency aid organizations, but we are also able to raise funds for smaller projects of choice; support for orphanages, the establishment of schools or medical clinics, refugees and much more.

The Emergency Aid Orchestra consists of five seasoned and acknowledged jazz- rock and rappers from Denmark with a broad supportive group of musicians that join us when needed.

We are always in search of collaborators who want to contribute with their resources and be on standby to assist when the Emergency Aid Orchestra takes action.

MEMBERS OF THE EMERGENCY AID ORCHESTRA

OLE KIBSGAARD, producer, guitarist, associate professor at RMC, Copenhagen
Has performed on more than 250 albums/CDs in the last 15 years with musicians Sissel Kyrkeby, Sound of Seduction, Aqua, Minh Doky and with several of the leading Danish symphony orchestras.

AL AGAMI, Rapper and actor
Has won several Danish Grammys. In 1993 for the best rap/dance release of the year, ”Covert Operations.” In 1995 for the best jazz-release, ”The Style Invention Album.” Has performed at Euro-House and together with Los Umbrellos released the album Flamenco Funk, represented on the British hitlist.